What the hell are you thinking?

What the hell are you thinking? That was a phrase I heard from quiet a few people when I decided to thru-hike the Appalachian Trail. I hate to say it, but most were my family. They know me best I would have to admit. I have been known to saddle up on the short bus from time to time.
However, what they didn't see was their friend and Son, a Veteran who was on his way out. Quit my job, (was a nice income), sold or gave away everything I owned except my student loans. God knows I tried to. And I was flying to Bangor Maine, then a bus and a short shuttle ride to the Appalachian Trail Lodge in Millinoket. Now I am not going to dive into the thru-hike because it is a 6 month long story, and as you all know, I am not the most patient person. So here we go with the short version. I just want the folks reading this to know where I am coming from and where I have been.
On the second day on trail, not far from the Rainbow Stream shelter, I sat behind a beautiful Oak with a pretty darn nice view. It would have been almost normal except for the Glock 22 pistol I was pressing into my chest. Well, like they say; If you are going tell it, then start off with it. That is correct. I had been planning for three months to get on the AT (Appalachian Trail), A place that was the most beautiful spot on earth; in my humble opinion, die. But I was stopped by a rather ironic thing.
And just when the story seems to be at its climax, I should mention during those three months, I was being sent name tapes from military uniforms of veterans who had taken their own lives. Mothers, fathers, sisters and brothers and countless other relatives of my brothers-in-arms were relieved to see their loved ones were not just cast aside and a shroud of taboo covering them. Finally they get to have their story heard.  I was going to carry them for the thru-hike and raise awareness (I hate that phrase). It is the same as yelling fire while walking away from the blaze with an extinguisher in hand. Education and solutions are my goal. Awareness is not education and acting as if there isn't a problem is not a solution. Moving on.....the story does have a point and I hope I relate it well enough.
You see.... those name tapes I was carrying. The very tapes I received from 363 families while inside I was planning my departure, saved me. I looked down as they sat in my lap and holy crap, it was like being struck by lightning. How could I do this, these families. I talked about education and solutions and I am about to say #$@& it, I am done. Those veterans memories had my six as crazy as that sounds. Believe this also, those families did too.
I have come to understand something about us... humans... the intelligent species on this planet. We have a glitch in our GPS. The part of us that would never give up if we just had a few seconds to rationalize; to snap out of it for a lack of better term. Choose happiness. Your life has pretty much hit that second turn in the toilet bowl base as the swirl gets closer if you quit your career, get ride of your possessions, and head out to kill yourself. Except for one reality. When you plan on burning down your world and you come back, that's when things get interesting. Happiness; the only emotion that requires no external action or input to be possible.
That is when we actually have a real shot at a solution if we don't miss it. Now I didn't say it would be easy, and yes I would like to get all my crap back, but that isn't even a possibility. What is a possibility is passing on what I see as a success in survival. A screenplay called Follow Your Shadow was written based entirely on that 6 month hike. Hopefully it will be filmed and edited in 2019 and released. It has a message that any veteran would connect with. Families will walk away with a better understanding of who their veteran is.
Before I close this section out and walk my dog, before she deposits a mushy land mine on my floor, I hope my rough on the edges story telling skills has some ability to convey what I wanted to. That is; a little thing us veterans call Brotherhood. It means more than its definition. It is a comfort mechanism. it is what makes us who we are. It is that knowledge and trust that no matter what, Your never alone. Never Alone, Never Have Been, Never Will be.

A little teaser leading up to the next time. From losing my wife to liver disease last year, to a rough few weeks contemplating stepping off, and then there was a disaster because of planning and other evil factors that had me close to ending the Unified Warrior Foundation. However, we are still going strong and have a 5400 mile bicycle ride to promote and raise funds for a veteran memorial, as well as the Into the Wild Summit Project. Actually, it will be the largest in America and designed around the understanding that veterans are soldiers, always will be. No matter their branch or generation, the memorial contains 85,000 custom made pavers as well as honors the past wars since WWII. Including Desert Storm, Granada, Panama, and Korea, and the over 120 non public missions where we have lost 332 American soldiers who will never be recognized for their sacrifice. 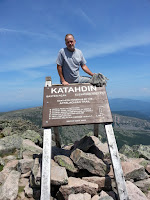 Feeling a little more at ease with this Blog idea. A very talented and determined friend of the foundation talked me into this. There are a few novels worth of material over the past years that I hope entertain as well as educate.

November 10, 2019 will be the Journey west. That's a pretty neat project and I am so ready to start.

If you have a few moments between this and that, slide on over to the UWF Facebook page and take peek. Website link is on the FB page.

https://www.facebook.com/UnifiedWarriorFoundation/
Posted by Keeper2016 at 8:45 AM

Keeper2016
Choose happiness I have been told. The only emotion that does not require an input.Difficult yes, but possible and worth the fight to get there.